7 Things That Happen to Our Skin, Bodies and Hair During Menopause | National Menopause Association
Skip to content

7 Things That Happen to Our Skin, Bodies and Hair During Menopause 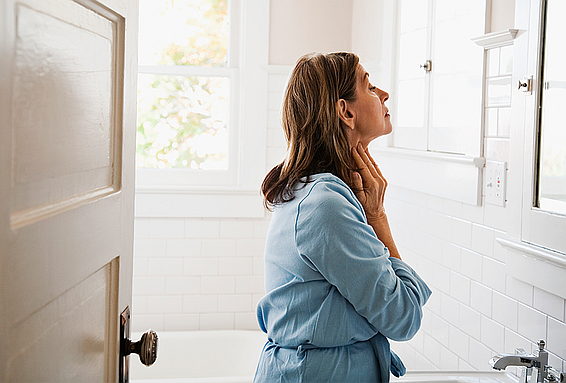 I remember the call from my mom: “I think I’m going through
the change,” she said, detailing her erratic temperature shifts, her lack of
sleep and the “pooch” below her belly button that used to shrink with exercise,
but no longer budged. I could hear the uneasiness in her voice, like she
couldn’t believe she’d reached this point in her life. Duxbury, MA plastic
surgeon Christine Hamori, MD hears this often from patients: “The topic of
menopause has been under a shroud of shame and guilt for too long,” she says.
“All women experience it, and it’s important that we discuss it,” especially as
studies reveal that more than 50 million women in the U.S. will enter this
phase of life by 2020.

THE 3 STAGES OF MENOPAUSE
The “Ovarian Retirement Plan,” as Louisville, KY OB/GYN
Rebecca Booth, MD calls it, has three unique phases. Here’s the scoop on each.

PERIMENOPAUSE
This is considered the winding down of a woman’s
biological clock in her late 30s or early 40s. “Menstrual cycles begin to
shorten, periods often change and PMS may become more dramatic,” says Dr.
Booth. Perimenopause is also not to be confused with “Premature Ovarian Failure
(POF), which is the loss of ovulation before age 40 and affects as many as 1
percent of women,” she adds. “The cause is usually unknown, but diabetes,
autoimmune diseases and smoking often contribute.” (“Smoking has been found to
put women into menopause two years earlier on average,” says Hamilton, NJ OB/GYN
Omnia M. Samra-Latif Estafan, MD.)

Rochelle Weitzner, CEO of Pause Well Aging,
a menopause-centric skin-care line, says that in certain circumstances, women
can be thrust into menopause early. “Induced menopause can result from chemotherapy,
radiation, autoimmune or thyroid diseases, and IVF treatments; surgical
menopause occurs immediately after a woman has her ovaries removed,” she
explains. “In this case, her symptoms may be more severe because of the rapid
change to her body.”

MENOPAUSE
This marks the cessation of ovulation—going a full
year without a period. “We are born with all of the eggs we will ever have, and
they deplete as we age, with all of them disappearing around age 51,” says Dr.
Booth. A sharp drop in predominant sex hormones—estrogen, testosterone,
progesterone—causes troublesome symptoms for many women (more on that later),
but some don’t experience them at all.

POST-MENOPAUSE
This stage begins immediately after menopause. Per the
U.S. Department of Health and Human Aging, because baby boomers are past the
midlife point, an unprecedented number of women are currently in this stage.

SHIFTING GEARS
The significant drop in estrogen during phases of menopause
can manifest both internally and externally. “Like pregnancy, menopause can be
a wonderful transition or a complete upheaval of normalcy,” says Dr.
Samra-Latif Estafan. “Everyone’s journey is different, so it’s important not to
believe everything you read online.” These are the side effects that can arise,
and what to do when they throw you out of whack.

SKIN
“The skin on a woman’s face has the second highest
concentration of estrogen receptors in her body—the reproductive area has the
most—which means that changes in hormone levels directly impact her skin,” says
Nashville, TN dermatologist Jill Fichtel, MD. The estrogen decline leads to
slower skin cell turnover, which “causes light to reflect off the skin
differently, affecting the color and brightness of the skin, and making natural
irregularities like wrinkles, oil glands and hair follicles more noticeable as
bumps and depressions,” she adds.

One of the most dramatic effects is the acceleration of loss
of elasticity and formation of wrinkles. “A study on the decrease of skin
collagen in postmenopausal women found a decrease of 2.1 percent per year in
the first 15 years after menopause,” says Dr. Booth. “Thus, on average, from
age 50 to 65, more than 30 percent of skin collagen will be lost.” The collagen
plummet then contributes to sagging, “especially around the cheeks, jawline and
neck,” notes New York plastic surgeon B. Aviva Preminger, MD. For those wanting
to restore a more youthful contour, in-office skin-tightening treatments such
as Ultherapy and AccuTite, as well as facelifts and necklifts, can provide
long-lasting results.

Dry and dehydrated skin are also concerns: “Moisture levels
of the dermis are no longer regulated, and the skin isn’t able to effectively
defend itself against oxidative stress,” says Weitzner. “When this is the case,
look for products containing hydrating ingredients that also promote collagen
production and support skin’s structural integrity, such as niacinamide,
peptides and hyaluronic acid.”

Skin-care products made with plant-derived molecules called
phytoestrogens—red clover, soy, grape seed—also help reverse signs of aging in
the skin. “They mimic the effects of estrogen, and when applied topically, they
activate estrogen receptors in the epidermis, promoting the skin’s ability to
hold onto water, as well as increasing collagen and elastin production,” says
Dr. Booth, who’s also cofounder of VENeffect, a phytoestrogen-based skin-care
line. “Over time, lines and wrinkles become less visible, overall texture
improves and skin recovers its glow.”

BODY
Metabolism is affected by estrogen, too, so for many women,
menopause triggers weight gain. “The weight seems to settle around the abdomen,
hips and thighs, and is very resistant to diet and exercise—the average woman
gains between 10 and 15 pounds,” says Dr. Preminger. Breast size can change as
well, but whether this is due to weight gain or changes in breast density is
not clear, Dr. Hamori says, adding that many of her patients experience
this during their 40s and 50s.

“A major side effect many women suffer from but don’t talk
about is achiness in the muscles and joints—in some countries, it’s the
number-one complaint,” says Mary Jane Minkin, MD, OB/GYN and clinical professor
of obstetrics at Yale School of Medicine. “We really don’t know what brings it
on—likely dryness in the joint capsules—but it’s being studied.”

A high rate of osteoporosis is associated with menopause as
well: According to the National Center for Biotechnology Information (NCBI),
more than 250,000 menopausal and post-menopausal women have this form of bone
loss (or decreased bone density) due to estrogen deficiency. “During menopause,
women experience an accelerated rate of bone loss of 3 to 5 percent per year
for the three to four years after their last period,” Dr. Minkin explains. “We
continue to lose bone after that point, but not at such a fast rate.”
Prescription medications such as bisphosphonates and denosumab, and
supplementation with calcium and vitamin D, can help minimize symptoms.

HAIR
According to Dr. Minkin, hair loss is not an “official” side
effect of menopause, but many women experience it, in addition to an increase
in the brittleness of their hair and a lack of shine. “The hormonal changes
decrease how long anagen—the growth phase of the hair cycle—lasts, leading to
thinner, finer, shorter hairs that can even reach the point of being vellus
hairs—the barely there hairs you see on your forehead or ears,” Dr. Fichtel
says. To strengthen fragile strands, fill your routine with products that
promote a healthy scalp and stimulate hair growth, such as essential oils and
minoxidil.