9 Symptoms Of Menopause That Most Women Overlook

The menopause phase in every woman’s life is certainly nothing short of a crazy, bumpy trip, isn’t it? There’s no defined start or endpoint for this phase. Well, there can be many symptoms out there that signal that it’s the menopause phase, but the nature of symptoms are such that they can be caused by other physical conditions as well. Therefore it’s very vital for every woman out there to understand the root of the cause of a particular symptom before jumping into a conclusion.

If we learn to combine the below-listed symptoms along with certain other considerations like one’s age, and nature of the body, we’ll be able to reach a strong conclusion of whether or not you have entered the menopause stage in your life.

Women sometimes undergo the perimenopause stage, a phase that knocks just before menopause. And then there’s another stage called postmenopause that comes right after menopause phase (1).

Below is a list of symptoms regarding Menopause that all you women might be ignoring. Please note that these symptoms can surface in any of the three stages of menopause. Read on.

These are similar to hot flashes except that these happen during the night, therefore the term “night sweats”. For those of you who don’t know what a hot flash is; it’s experiencing sudden heat sensations in the head, chest, and face and is also accompanied by sweat which makes you feel as though you’re drenched in sweat (2). If you’re experiencing these hot flashes also known as vasomotor symptoms during the day, then it’s likely that you also get night sweats at night. If this is occurring regularly, then you sure have stepped into the menopause phase of your life.

Hormone fluctuations in your body can cause discomfort, and if it’s giving you night sweats and other problems to an extent that you’re having sleepless nights, then, it’s menopause at your doorstep. Your problem of sleepless nights can be indicating at insomnia as well.

It’s normal to experience bleeding during your periods when you urinate. But, if you’re facing bleeding at a time when your period dates are far away, then probably, it’s the onset of menopause stage. And this symptom is clearly not normal, therefore, get yourself checked immediately.

Mood swings are considered to be the most natural outcome of hormonal imbalance in a woman’s body. It’s no hidden truth that hormones are what control our moods. And if you’re suffering from way too many mood swings and they are drastic in nature, then, you’ve probably hit the menopause button.

Hormonal imbalance is at its peak during the menopause phase. Why does such a drastic imbalance occur? Well, it’s because the ovaries are producing lesser and much lesser estrogen (3). And the lower the estrogen levels become, the more imbalance occurs in your hormones. In this phase, the ovaries are producing fewer eggs as well which impacts the hormone production in the body. If your blood reports are showing a major decline in hormone levels and indicate severe hormonal imbalance, then, you’re facing the menopause phase of your life. 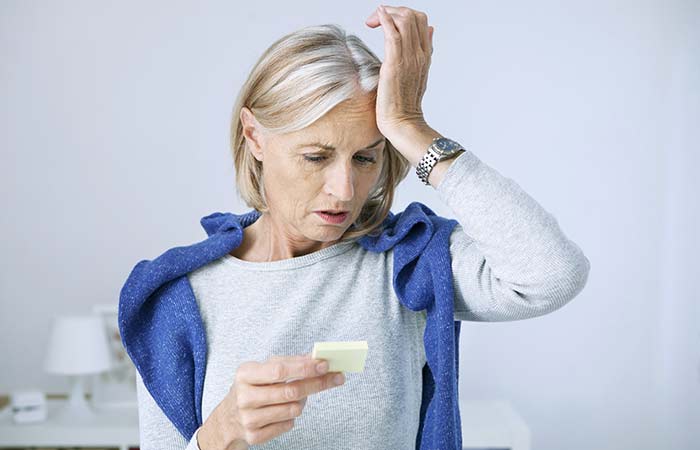 People usually attribute memory loss to old age. But if you’ve just entered your 50s and you’re having too many instances of memory lapses, this is a clear cut indication of the onset of menopause.

The onset of menopause also affects your libido levels. Libido is what is responsible for a woman to feel the need for some intimacy and action (4). During menopause, when these libido levels are low, a woman will naturally not want to engage in any activity that involves romance.

Estrogen is the hormone that is responsible for your periods to come and go timely and smoothly. During menopause, there’s a decline in the body’s estrogen levels. This can cause your body to undergo very strange patterns of the menstrual cycle (5). And at times, you might also miss your periods for more than a month. Check with a doctor if irregular menstrual cycles continue so that you’ll have a clear idea if its menopause or not.

Most of the symptoms mentioned above could be related to other health conditions else as well. And we understand it will be overwhelming when you go through these symptoms on an individual level. Paying heed to them is important especially if you’re in the age group of 48-55. Also, you can find many natural remedies online that will help you battle the pain caused by these symptoms.

If you’ve already entered the menopause phase, how did you find out about it? Let us know in the comments section below.

The post 9 Symptoms Of Menopause That Most Women Overlook appeared first on STYLECRAZE.