Do Men Really Go Through Menopause?

There’s no denying that when women reach a certain age they go through what is often so classically referred to as “the change.” Menopause is a fact of life for all women. It marks the end of a woman’s fertility and includes the termination of the production of hormones, estrogen and progesterone.

During this time, which is different for every individual, a woman may experience numerous symptoms including hot flashes, fatigue, anxiety, weight gain, depression and any number of emotions. Eventually the menstrual cycle will cease along with hormone production.

Since the beginning of time, women have known about and prepared for “the change.” But what about men? While they may be preparing for the menopause-related symptoms of their wives, should they in fact be preparing for their own change, or “man-o-pause?”

Male menopause is not considered a defined medical condition. Androgen or testosterone decline, andropause or late-onset male hypogonadism are all terms used to describe the decrease in male hormone production (though the World Health Organization does not officially recognize the term “andropause”).

As a result of decreased testosterone, men often experience menopause-like symptoms. These may include fatigue, depression, moodiness, sexual dysfunction, weight gain and/or sleep problems. Due to the similarity of many symptoms, it’s no surprise that aging males have often been unofficially diagnosed with “man-o-pause.”

Male menopause-like symptoms and female menopause differ in a few important ways, however. Men don’t experience a complete loss of hormone production as they age. Rather, men never run out of the substance needed to make testosterone and can actually produce sperm well into their 80s. A woman’s body, however, will stop producing hormones at which point she will no longer be fertile.

Female menopause is considerably harder on a woman’s body than decreasing testosterone is on a male’s. A man’s testosterone level declines at a rate of about one percent each year after age 30.

This slow rate of decline isn’t nearly as much of a shock to the system as female menopause, where a sudden plummet in hormone production occurs. The drastic decrease in both estrogen and progesterone production is what often leads to more severe and noticeable symptoms.

But while “male menopause” isn’t technically a recognized medical condition, it doesn’t mean that the symptoms experienced aren’t real and can’t lead to complications. Sexual problems, depression, weight gain and many of the other side effects associated with declining testosterone levels can significantly affect the quality of a man’s life. Consulting a doctor is often recommended as these symptoms may be caused by something other than low testosterone.

Treatment options are also available to help ease the severity of the symptoms. Hormone replacement therapy is controversial, as synthetic hormones can lead to other serious conditions and have dangerous and often uncomfortable side effects. 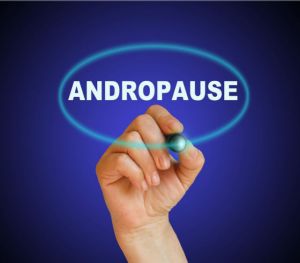 As with women going through “the change,” the best way to combat diminishing hormone levels is to maintain a healthy lifestyle. Often, sleep, mood and weight can be influenced greatly by proper diet and exercise. Consult a dietician or personal trainer for advice and be honest with your doctor about any symptoms to rule out other more serious conditions.