How CBD May Help With Menopause Symptoms – AskTheTrainer.com 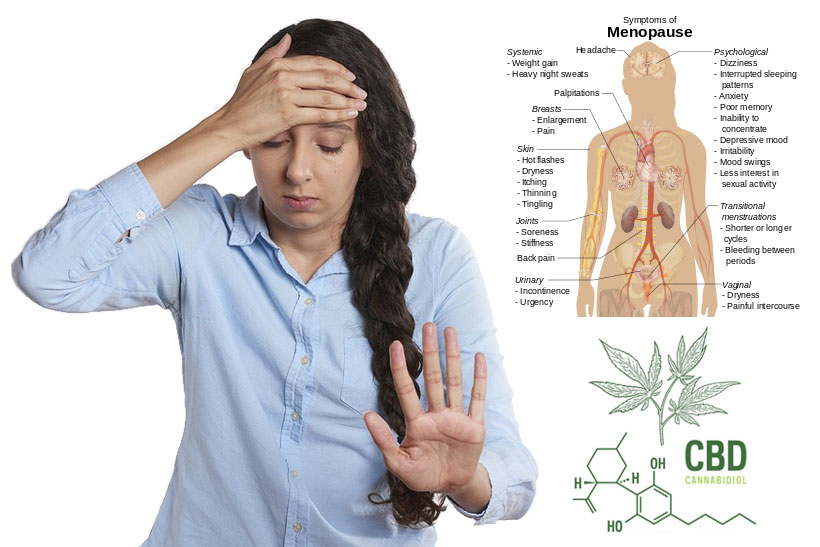 Menopause is something that all women go through as part of the aging process, typically between the ages of 45 and 55. The process causes a decline in oestrogen levels, marking the end of a woman’s childbearing years. Unfortunately, menopause can also be very painful, both physically and emotionally.

Many women choose hormone replacement therapy (HRT) to relieve symptoms of the menopause, but it’s not a recommended treatment for all and some opt to avoid it altogether. Encouragingly, cannabinoid research suggests there may be a new route for menopausal women to go down, taking cannabidiol (CBD) oil.

CBD oil is a unique type of cannabis product, which has none of the psychoactive properties that the famous and notorious plant is renowned for. CBD is strictly therapeutic, interacting with the body’s endocannabinoid system (ECS), which is known to regulate the reproductive cycle. Cannabinoid receptors, which CBD works with, are found in abundance in the body’s reproductive organs, hence why the compound can have a beneficial effect.

Inflammation often increases when levels of oestrogen are reduced – this can make a number of conditions, including arthritis, much worse. However, CBD can help to ease the inflammation and pain that comes with arthritis. This is apparent from studies which show the connection between the immune system and the ECS, with CB2 receptors linking the two. Taking CBD serves to relieve inflammation through anandamide-mediated activation of these receptors. Anandamide does not simply suppress inflammation, but regulate the immune system with immunomodulatory signals.

The benefits of CBD were also demonstrated by a 2018 survey. The results found that more people were taking CBD for arthritis than any other condition except chronic pain.

Osteoporosis leads to reduced bone density, and heightens the risk of bone fractures. When a woman enters the initial stages of the menopause, she often experiences bone resorption, where more calcium and minerals are taken away from the bones than is brought back in, hence the increased chance of bone breakages.

CBD treatment has already been shown to help with healing times after a fracture, thanks to the role of the ECS in forming and strengthening the bones. Therefore, consuming CBD may combat the threat of osteoporosis during the menopause.

Sleep deprivation is very common among menopausal women, and the inability to get an uninterrupted night’s sleep can have devastating effect on all-round health. Fatigue can cause mental weariness and stress, and make depression and anxiety more likely. While eliminating distractions such as smartphones and tablets in the bedroom and incorporating meditation and other calming techniques can promote a better night’s sleep, CBD can also be beneficial.

CBD is thought to regulate the body’s circadian rhythm, which controls when we feel awake and raring to go, and tired and ready for bed by releasing and suppressing various hormones. CBD consumption also promotes more rejuvenating sleep by maximizing the time the body spends in deep sleep, a phase which also helps to heal the brain and remove neurotoxins.

Hot flashes are one of the most well-known symptoms of the menopause, as they are the most visible to others. However, what appears as a temporary and short-lived issue can have a seriously negative impact on quality of life, due to the disruptive effect they can have during the day and when trying to sleep at night. Hot flashes occur during the menopause because the body’s cooling system becomes more sensitive, and is triggered by much smaller changes in body temperature.

There are few treatments available for hot flashes, however the effectiveness of SSRI drugs at relieving them suggests that the neurotransmitter serotonin and the serotonin system are implicated in them. CBD is a serotonin 1A receptor agonist, which could explain why so many are finding that the cannabinoid can help with hot flashes.

One of the most concerning symptoms of the menopause is memory loss, as this can be debilitating in the long-term, increasing the likelihood of dementia and Alzheimer’s disease. Our memories are formed in the hippocampus, a small but critical region of the brain located in its centre. Oestrogen plays an important role in the hippocampus, as it stimulates neurogenesis.

Without oestrogen, the hippocampus needs something else to promote new connections in the brain. CBD wholesale has repeatedly been shown to encourage hippocampal neurogenesis, as has another non-psychoactive cannabinoid called cannabichromene (CBC).

While more study and trial may be in order to fully understand why CBD helps women with their menopause symptoms, there’s no denying CBD’s amazing anti-inflammatory and other healing effects that have been demonstrated time and time again to be effective at treating a number of ailments. In fact, many women have already reported astounding results when using CBD to treat their burdensome menopause symptoms.